Imagine designing a car by sculpting and manipulating a car-sized image in the middle of the room in which you’re standing. Not sealed into a helmeted VR environment, but looking out at your world and seeing an actionable 3D image floating in the air there––amid the furniture and family dog––an image you can manipulate with your hands.

It’s soon to be [augmented] reality.

The possible applications, from auto design to construction, have industry holding its breath 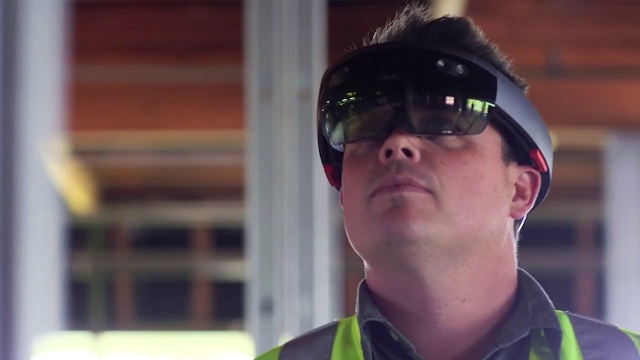 Microsoft stands to set the world on its ear with the much-anticipated HoloLens, a translucent holographic computer one wears like space-age goggles, that allows the user to create and manipulate real-scale 3D images that visually occupy the real space in front of them, in a real room. Microsoft is calling this interface “Mixed Reality” because the image is presented in the real world, so to speak, and in real world scale and context.

The HoloLens comes bundled with HoloStudio––a 3D modelling app by Microsoft that is 3D printer compatible––several augmented reality video games and, in summer 2016, a little something called ActionGram, which enables the user to assemble short 3D holographic vids combining assets created by Microsoft and one’s own imagination.

Several years ago, homebuilders and architects were excited about the possibilities of allowing prospective homeowners to take virtual tours of a range of offered home designs. So the idea of VR as a scalable application for business use is not new, but the notion of VR as an augmenting tool for design professionals is ripe with possibilities. These images appear in the context of your real world, to scale, and can be manually sculpted with your hands. It’s easy to see why businesses are so closely watching developments.

At present, Microsoft is rolling out a $3000 ‘Development Edition’ for those in the digital sector whose coding expertise allows them to work with the possibilities of the HoloLens. A consumer version will surely follow, once the user experience has been ironed out by the early adopters in the developer sector.

Mild beta-user complaints so far center around the smallish virtual frame that contains the holographic image, a usable rectangular area directly in front of the eyes that has been described as about the size of an iPhone screen. Once the mind immerses itself in the experience, the image scales to its surroundings (for example, the room you’re in). But the framing context is a bit fragile––looking away peripherally causes the image to vanish. Another flaw in the dev release is the reported difficulty in successfully “tapping” the image to activate its pliability. A specifically bent forefinger tapping the empty air cues the machine to make the image controllable, but journalists who have been given a test drive of the HoloLens report that, as amazingly immersive and thrillingly realistic as the visual experience is, “tapping” the image just so is a bit more difficult than it sounds.

Nevertheless, the clarity and actionable realness of the imagery, coupled with the ability to design on the fly, in any room and with bare hands, has designers across all industries pulling at the leash to have a crack at the new magical toy. Time will tell if Microsoft is set to come charging back into the digital ring and make itself a player again in the world of recreational computing. Apple, are you listening?