Impressive architecture comes in all shapes and sizes, but tall buildings are still among the most awe-inspiring features of the built world.

Records for the tallest buildings are kept around the world. Each time one is broken, the entire world applauds. While Toronto is home to the majority of Canada’s tallest buildings others can be found in Montreal and Calgary.

As of June 2021, there were 35 completed buildings over 200m tall—a rough benchmark used to determine tall buildings—in Canada. The Council on Tall Buildings and Urban Habitat (CTBUH) has set additional benchmarks for Supertall buildings (over 300m tall) and Megatall buildings (over 600m in height). For comparison, China has around 750 buildings over 200m tall. The tallest building in the US, the One World Trade Center in New York City, is 541m tall, while the tallest building in the world is the Burj Khalifa in Dubai, measuring an astounding 828m!

Below is a list of Canada’s 15 tallest buildings that are either completed or currently under construction: 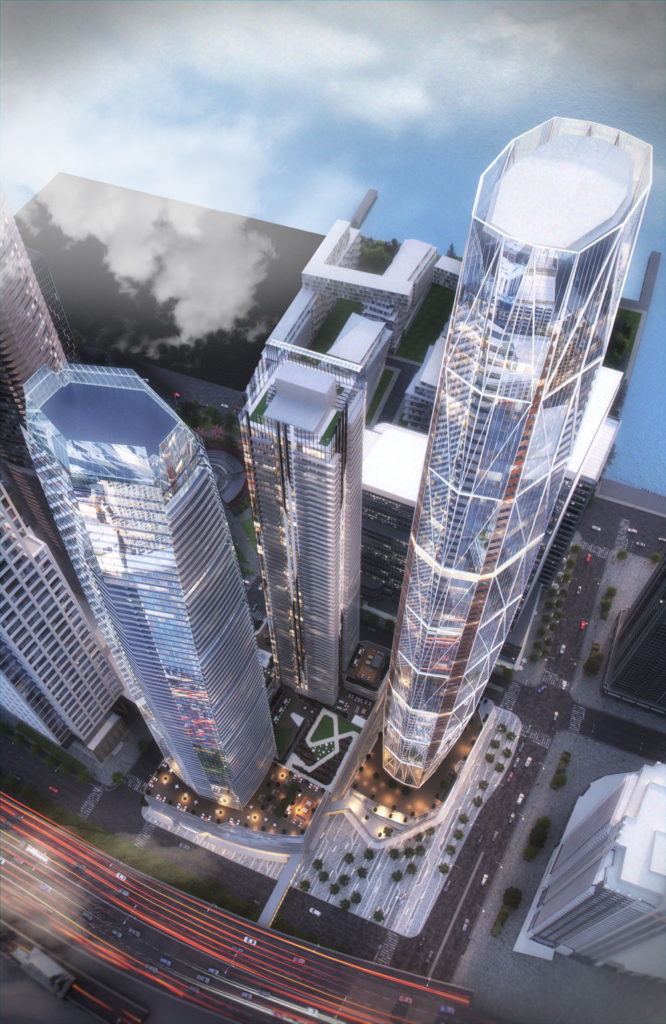 Part of the One Yonge development of residential condominiums, Sky Tower, is scheduled to be complete in 2024 and will house around 800 one- to three-bedroom suites along with a 12-storey hotel. At 95 floors, it will become the tallest residential tower in Canada, atop a seven-storey podium.

When complete, the development by Pinnacle International is to have three towers—Sky Tower, along with two shorter office buildings at 35 and 22 storeys.

Hariri Pontarini Architects is behind the structure’s design, which is described as being tapered at top and bottom and criss-crossed with a bronze-coloured diagonal grid.

One of the most eye-catching features of the One, a new 85-storey residential tower under construction at 1 Bloor Street West, is its hybrid exoskeleton. It’s a specialty of architect Foster and Partners. Metallic trusses that offer much of the building’s support encase its exterior while leaving interiors wide open to catch the sunlight.

Just above the entrance atrium, eight storeys of retail will provide the base for 416 suites on the top floors of the building. 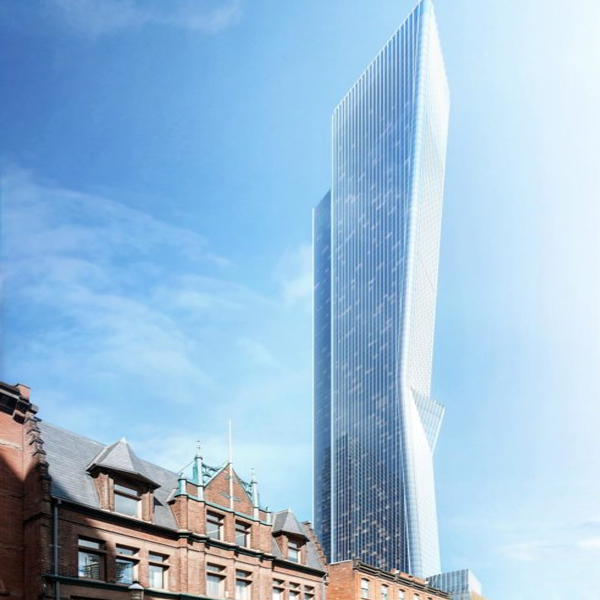 Located at 383 Yonge Street, the YSL Residence Tower features curtain wall glazings that wrap the body of the building, along with stone detailing at street level. Part of a master-planned community by Cresford Developments, YSL maximizes views throughout the interior design and features practical details like terrace stepbacks, where residents can enjoy sheltered outdoor space.

Along with Kohn Pedersen Fox, Toronto architects Alliance created the space, which will house 957 suites on its 98 floors. The building will feature among the tallest residential structures in the country.

The tallest building in Canada as of June 2021, is First Canada Place. It has held that title since its completion in 1975 and is currently the 196th tallest building in the world. Housing three levels of retail, restaurants and services, with offices above, First Canadian Place is connected via a system of underground pathways to public transit and to the neighbouring Exchange Tower, where the Toronto Stock Exchange is located. EllisDon and AJW Engineering built First Canadian Place, which is owned by Brookfield Properties.

The next tallest building in Canada marks a big drop in global rankings: the St. Regis in Toronto is the 287th tallest building in the world. Home to 258 of the city’s largest hotel rooms, including 124 luxury suites, there is also a restaurant on the 31st floor of the St. Regis and a ground floor lounge. Zeidler Partnership Architects designed the structure, which was then built by Multiplex and LCL Builds Corporation.

There are 74 residential suites in the building, formerly known as Trump Tower, before InnVest Hotels’ acquisition of the building in 2017. Afterwards, the company did a complete revamp with the help of DesignAgency.

Ranking at North America’s 46th tallest building, the Scotia Tower is located just next to the St. Regis in Toronto’s financial district at Bay and King Streets. Scotia Tower is one of three buildings included in Scotia Plaza, a business complex that houses 2 million square feet of office space. The building was designed by WZMH Architects and is LEED Platinum, Zero Carbon, and Energy Star certified.

Recognized as Canada’s tallest residential tower (as of now), Aura at College Park offers 995 units that stand atop a granite and glass-clad podium, where shopping, restaurants, and a fitness facility are located. Penthouses, located on floors 75, 76, and 77, boast square footage between 2,200 and 5,000, while the top floor penthouse measures over 11,000 square feet.

Developer Canderel worked with Architect Graziani and Corazza to design the building, which was completed in 2014.

Owned by Oxford Properties, The TD Canada Trust Tower is part of Brookfield Place, located at Bay and King Streets in Toronto. It’s connected to much of the downtown core via the city’s underground PATH system and has access to the retail concourse there. The TD Canada Trust building is also just down the street from Union Station. The building is currently home to TD Canada Trust, CIBC, and Canaccord Genuity offices.

B+H Architects created the unique Brookfield Place, complete with spire and recessed design of the TD Tower and the accompanying Bay-Wellington Tower. The tower lobbies come together at the famous Allen Lambert Galleria.

Although the M3 is the first on this list located outside of Toronto, the building is still right next door, in Mississauga. When complete, it will be home to 900 residential units.

Developers Urban Capital Property Group and Rogers Real Estate Development Limited are working on the $1.5 billion master-planned project, which will include eight towers situated on 15 acres, housing a total of 6,000 residential suites. Architects on the project are CORE Architects and Cecconi Simone.

Under construction: to be completed 2023

One Bloor features a six-storey podium as the base for a total of 76 floors that house 700 units. Since architect Hariri Pontarini wanted the building to offer a subtler presence to the intersection, it designed the podium to ease itself into view. Glass balconies create curved lines in the façade, offering a flowing effect right up to the sloped roof.

Developer Great Gulf wanted to create density and sustainability in the area while still encouraging street-level activity, so crucial to the neighbourhood. Located at Yonge and Bloor Streets, the building offers easy access to two subway lines. It reaches sustainability goals in part through its heavily landscaped roof and a curtain wall in place of a window wall.

In Alberta’s debut on this list, Stantec Tower is the builder’s headquarters in its hometown, so it was designed to be extra special. The goal was achieved by making it the tallest structure in Western Canada. However, that’s not all that makes it special. In fact, Stantec Tower is such an iconic building that it went on to win the 2020’s International Property Award for commercial high-rise architecture, an ENR Global Best Project Award, and a CEA Showcase Award of Excellence for Engineering.

The building was also intended to set the standard for sustainability. It was designed for efficiency with flexible workspaces that can grow with the team, reduced-water fixtures, and easy access to the city’s public transit system.

Completed in 2017, Brookfield Place East Tower is part of a 2.4 million-square-foot development in Calgary. It consists of two office towers, an outdoor plaza, and retail space. Architect Arney Fender Katsalidis Dialog saw the undeveloped site as an opportunity to contribute to the public realm.

For two years, Brookfield Place East was the tallest tower west of Ontario, before the completion of Stantec Tower. Office space at Brookfield Place is occupied in part by Cenovus, a prominent North American oil company.

Representing a new addition to Toronto’s skyline is the in-process 47-storey office tower at 160 Front Street West at Simcoe Street. General contractor PCL is working alongside B+H and Smith Gill Architects and structural engineer RJC on the 1.2 million-square-foot development. Tenants in the Cadillac Fairview development will include TD Bank and the Ontario Teachers’ Pension Plan.

Fabricator and constructor Walters Group is shaping the tower footprint, where it will lay 9,500 tons of structural steel and 1.07 million square feet of metal decking.

Architect I.M. Pei designed Commerce Court West, East, and South to accompany the existing North Tower, whose history reaches back to 1931. When built, the 34-storey North Tower was the tallest building in the British Empire, so the 57-floor West Tower was a fitting addition when it was completed in 1973.

Clad in imperial stainless steel and the largest of the four buildings, the West Tower helped to define the up-and-coming area. The building was set back from the street to enhance public access to its largely open first storey, while the rest of its façade alternates bands of glass and steel. The newer buildings combine modernist materials with traditional stone to bring together the development’s past with the emerging cityscape around it. The complex is home to offices and retail space on Toronto’s bustling Bay Street.

Adamson Associates and WilkinsonEyre are behind this development that connects the Waterfront District to the Financial District along Bay Street in Toronto. CIBC Square Phase 1 is one of two towers accompanied by a raised, open-to-the-public park, designed to bring the community together.

The Phase 1 tower is now complete—a 50-storey building with 1.6 million square feet of office space, with a multi-storey office entrance at the podium.

Procore’s project management software connects your teams and project information so you can make faster and better decisions.